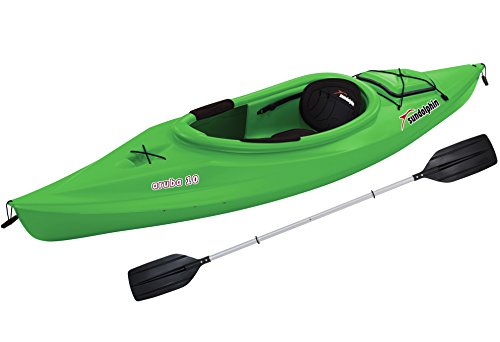 The Sun Dolphin Aruba kayak is a single seater sit-in kayak that is considered to be an entry level vessel, perfect for those who are new to the thrilling sport of kayaking.

The Sun Dolphin Aruba Kayak is best described as a “jack of all trades, master of none” kind of kayak as it performs comfortably in various environments, but then again, is not the best of the best of kayaks in any of these environments.

This kayak is definitely interesting, so, let’s get down to it and delve a little deeper into the strong and weaker points of the Sun Dolphin Aruba!

Design and Makeup of the Sun Dolphin Aruba Kayak

The Sun Dolphin Aruba is made of a hard polyethylene shell and sits at 10 feet long, and at a width of 2’6” (or 76 centimetres). This single solo kayak is both lightweight and strong. The cockpit is very comfortable, allowing more than enough legroom for the single kayaker.

This kayak has a maximum weight capacity of 250 pounds (or 113 kilograms) whilst only weighing 40 pounds (or 80 kilograms) itself. And on a purely cosmetic level, you can choose from a few colours.

Like we mentioned above, this kayak is a jack of all trades. The Sun Dolphin Aruba is considered to be so versatile as it is a good boat for both novices and experts, can be used on various different types of waters and can be used purely for recreation or as a fishing kayak.

At only 40 pounds (or 80 kilograms), this is a fairly lightweight vessel. Transporting this Sun Dolphin Aruba is not as physically straining as other single seater kayaks. This boat can very easily be loaded onto or inside of a SUV or a truck.

This light weightness of this kayak also makes transporting it from your vehicle onto the water much, much easier.

The bottom of this kayak is flat, an important aspect of the boat that keeps it steady and stable on most waters. The Sun Dolphin Aruba is so stable, in fact, that as mentioned above, it is able to comfortably carry loads up to 250 pounds (or 113 kilograms).

If you are using the Sun Dolphin Aruba as a fishing kayak, you are able to increase the stability of the kayak (important when you’re reeling fish in all day!) by fastening outriggers to the side of the kayak.

The Sun Dolphin Aruba has been described by one customer as being and feeling so stable that there was absolutely no fear of the kayak tipping over at any point. Another nod to it’s durability and stability is that for a relatively small kayak, the Sun Dolphin Aruba sure can hold a lot of weight!

The Sun dolphin Aruba also comes with a two year warrantee, meaning that you can kayak stress free for a whole two years! Another tick in the pros box!

The Sun Dolphin Aruba is narrow both in the bow and stern which ensures that it stays on track whilst gliding.

It’s very comfortable in some areas

Two words; leg room. Being uncomfortable while kayaking can really suck the enjoyment out of the sport. The more cramped you are, the less time you are going to want to spend in your kayak. The Sun Dolphin Aruba kayak has ample leg room which allows for stretch breaks without having to vacate your vessel.

The hull of the kayak has also been noted to be comfortable and spacious. The seat, while not entirely comfortable, is adjustable which adds to the comfort of the hull.

This kayak is fitted with leg straps which when used not only make you feel more secure, but will ensure a more powerful stroke when paddling.

One of the downsides of the Sun Dolphin Aruba is that there is not much storage space. The kayak is, however, modifiable by someone who knows what they are doing. A few owners of this versatile kayak have documented the successful cutting away of back region (on the upper surface of course) of the boat, creating more storage space with a little bit of elbow grease but relative ease.

If you are interested in using the Sun Dolphin Aruba as a fishing kayak, these modifications might be of particular interest to you. Instructional videos made by customers who have modified their boats are available online. Make sure you know exactly what to do before you get started!

Safety is always, always the most important factor when it comes to buying a kayak. Due to its clever and sturdy design, the chances of capsizing in this kayak are slim to none. However, should you happen to capsize, it is so easy to exit the cockpit of the Sun Dolphin Aruba that there is no chance of you becoming stuck or trapped in your kayak, a really great .

The thought that has gone into customer safety during the design and construction of the Sun Dolphin Aruba even spills over into the colours that is comes available in. These kayaks are available only in bright colours which make them easily spottable if you happen to get lost or run into any kind of trouble. The bright colours of the boat are also designed to avoid any chances of collisions, as this little boat is quite quiet and stealthy!

It’s available for a good price

The Sun Dolphin Aruba is available for around $200 US, which is a great price that you would have to work very hard to beat as it is, but when you really look at what you’re getting in this sturdy and versatile little kayak, it’s a great price.

And in the interest of fairness, here are a few negatives of the Sun Dolphin Aruba, as documented by customers who have used it at length.

The storage space is limited

The limited storage space is definitely a con for those looking to use this kayak as a fishing kayak, as there is also no designated area to store your fishing rods and reels.

It comes as a singular unit

A kayak being a singular unit basically means that it is sold entirely by itself. Any other accessory you need like a paddle, any kind of cord or rope or safety accessories will need to be bought separately.

This is definitely a negative, but not really an incredibly strong one as the Sun Dolphin Aruba kayak is so fairly priced, that you are sure to have enough cash left over in your kayak budget to buy yourself the add ons that you might want or need.

It does not have the best buoyancy

The buoyancy issue with the Sun Dolphin Aruba is not really a big issue per say, just something that is probably not as good as it could be.

The kayak is made up of plastic which is naturally buoyant, and it is fitted with styrofoam blocks situated in the rear of the kayak to aid in buoyancy. Despite this, there have been a few complaints about the kayak’s buoyancy. This issue can however be solved with fitting your kayak with even more styrofoam blocks.

The seat is uncomfortable

We know you have leg room for days in the Sun Dolphin Aruba, but leg room alone does not make for absolute comfort when you are out on the water all day!

There is no padded seat on this kayak. The seat is made from the same polyethylene as the rest of the boat, meaning that this is not the most comfortable throne for long periods of kayaking. While you could surely create some kind of padding for yourself, it remains a negative point.

When it comes to getting the most bang for your buck, the Sun Dolphin Aruba is most definitely the way to go. This vessel also lands in the plus category for those new to the sport as it is still a great kayak for those moving into the realm of intermediates, whether that be on a lake, river or in the ocean.

All in all, we are inclined to say that for a starter kayak, the pros heavily outweigh the cons (a thought that seems to be shared by the hundreds of people that have rated the Sun Dolphin Aruba very highly online).

We are officially declaring the Sun Dolphin Aruba kayak a must consider for those looking to get started, and even for those just looking for something well priced, versatile and easy!

Related Articles
About Us

WhaleNation is a resource to help you enjoy the waters with kayaking, paddle boarding, fishing, and other recreational water sports guides.

We’re here to give you the low-down on the tips, tricks, and techniques of different sports so you can have a great time out on the open water.

Looking for Something Specific?
Affiliate Disclosure: WhaleNation.Reviews is a participant in the Amazon Services LLC Associates Program, an affiliate advertising program designed to provide a means for sites to earn advertising fees by advertising and linking to Amazon.com